The sensual voice of the First Lady of Polish Jazz, a selection of timeless Christmas evergreens and the company of the European Jazz Quartet. This is the essence of the "Christmas Songs" concert in Stary Maneż in Gdańsk. Sunday, 12th December 2021, at 7 p.m. Aga Zaryan will perform in Stary Maneż. 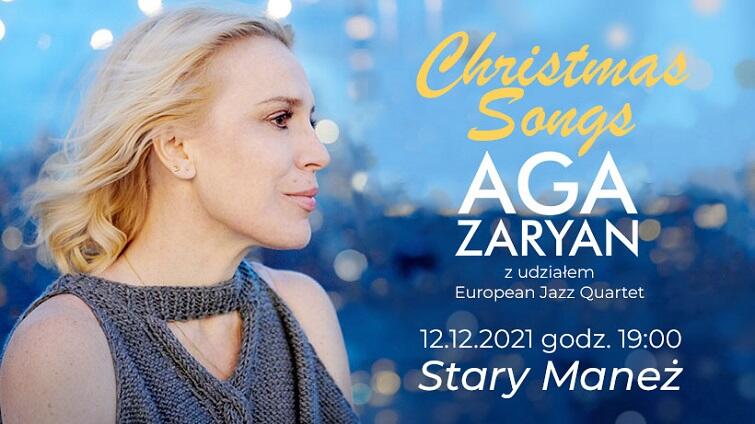 The singer will take us into an atmosphere full of Christmas aura. The great advantages of the performance will be the consummate accompaniment of the European Jazz Quartet and a unique selection of songs. You will hear, among others joyful "Santa Claus Is Coming To Town", "Jingle Bells", which will complement the pensive "Someday at Christmas" or the romantic "The Christmas Song". The concert repertoire includes songs from Aga Zaryan's „What Xmas Means To Me” albums.

The work of Aga Zaryan is the quintessence of what is best in the history of jazz, and at the same time a continuation of the tradition of the legendary achievements of jazz singers. The artist owes world recognition to the unique style, taste and approach to singing with a characteristic lightness of phrasing and a warm, matte tone of voice.

Aga Zaryan is the winner of the most important awards in the music world. Her albums are selling in record numbers, proving that ambition and sophisticated style make it possible to reach a wide audience. The artist conquers the hearts of the audience by giving concerts all over the world.

Aga Zaryan is also an active social activist, including: the Ambassador of the Polish Humanitarian Organization, an ally of the KPH. For her activities, she was awarded the Charity Star.

Women In Travel Summit in Gdansk