Around Gdansk by galar

This one is about Gdansk’s galars. Make sure not to mistake galars for galleys, though. Galleys sailed across the Mediterranean and were often powered by emaciated slaves chained to the oars. 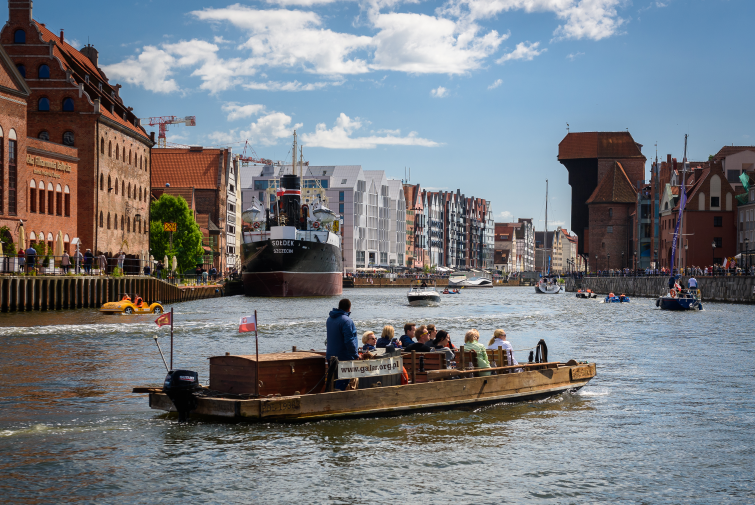 Galars, on the other hand, were a type of river vessels used in Gdansk. After all, Gdansk was where the grain from the rest of the Republic was transported to. Galars had no sails, they only had oars. The shape of the vessel was roughly rectangular. Both the prow and the stern (the front and the back) were slightly raised, which prevented the boat from flooding. At the stern, the vessel had what was referred to as the skipper’s shack, with the rudder affixed to it. The rudder was attached using a steel or brass bolt, which allowed it to turn. Each galar had the capacity of between 4.5 and 6.5 lasts. One last equalled roughly 3000-3800 litres.

The crew numbered between 6 and 8 raftsmen. Crew members were usually peasants who lived near the rivers used to transport goods. They developed their own dialect, customs and folklore, and were a gaudy addition to the orderly life of merchant towns. Galars usually also served as a source of income (however small), as they were salvaged for wood after reaching their destinations.

But why are we talking about them so much if they have nothing to do with Gothic architecture?

Tourist galars have arrived in Gdansk this season, and can be found next to the Crane (here’s your Gothic!). They are graceful, small, and have benches and life vests to ensure passenger safety. You can also enjoy the guidebook “Around Gdansk by Galar”, as well as chatting with the modern-day raftsmen.

These tourist galars are not one use-only, so if you do not manage to give them a try this season, be sure to come to Gdansk next spring to enjoy a trip down the Motlawa. After all, this was the main port of the Republic, the Golden Gates of the Kingdom of Poland.

A cruise aboard a galar is sure to be an unforgettable experience – the city looks very different from the water. Who would not want to sail past the famous Crane, like a raftsman of old?

This new attraction joins the list of interesting things to see in the city on the Motlawa.