Sightseeing requires enough strength and stamina, for which it is necessary to eat. You can do that in one of the city’s numerous restaurants and bars. However, you can also grab a bite on the go from one of the stands in the Trade Hall shopping centre. While you there, be sure to visit the first St Nicholas Church in Gdansk. 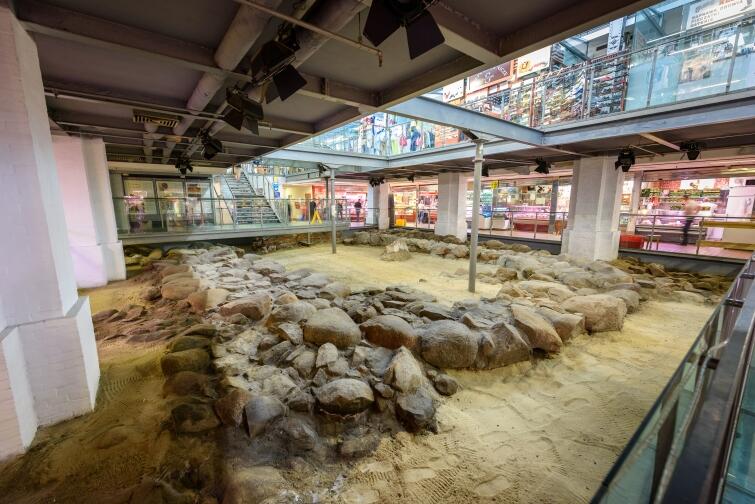 During the excavation efforts carried out during the rebuilding of the Hall, archaeologists discovered traces of a merchant settlement, a cemetery and a two metre-wide foundation of the first church’s apse.

What is an apse, you ask? In simple terms, it is usually a semi-circular room “attached” to a church. Very often, it is located at the eastern end of the building – in such cases, the room contains the chancel and the altar.

The foundations of St Nicholas Church are the oldest foundations found so far in Gdansk. It is thought to have been a gift from Duke Swietopelk II to the Dominicans. The monks extended the church and, when it was no longer large enough to meet the growing needs of the community, built a new temple in the 14th century, which has survived to this day.

A multi-layered cemetery was also discovered, which dates from the 10th-14th century. The graves contained decorations such as rings, bead necklaces and temple rings, which were very popular at the time. One of the graves hid a particularly unique artefact. It was the first discovery of this kind in Poland. The artefact in question was a stone. A black-yellow stone. Research conducted by a pair of anthropology and paleopathology experts showed that it was in fact... a kidney stone...

The settlement discovered by the archaeologists was situated four metres under the building’s floor. In total, three wooden houses from between the 12th and 13th century were discovered. In addition, fragments of everyday use containers and gnawed bones were also found (will we leave similar traces after we are gone?), in addition to prayer beads and lumps of amber.

Excavation efforts under and near Gdansk’s Trade Hall changed our perception of the city’s history, in addition to giving us new places to visit when shopping.