Imagine you are at a midnight mass, and you suddenly hear words ordering all lights to be extinguished. The crowd empties the temple and spills into the streets. The parish priests takes a stick, someone else brings a dry leaf or an equally dry plank of wood. The stick is leaned against the wall of the church, and the spinning begins. As if they are trying to build a fire. That is indeed their goal. The moment the fire starts, a special candle is brought to be lit. This is the Paschal candle. Other faithful light their candles off of it. This is a short description of the Easter Vigil. It must begin after nightfall, and must end before sunrise. 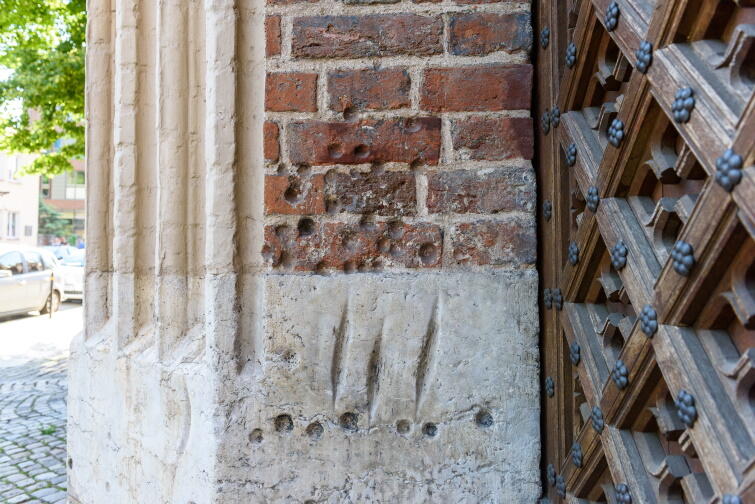 So how is the title related to this?

Don’t worry, it is... the next time you are wandering around Gdansk, take a closer look at the bricks making up the southern or western church walls. Sometimes, you will have to lean in a little and touch the walls or the foundation slab. You will easily be able to feel the pits, as if made using an ice cream scoop. These are the pits left by fire sticks.

How did they come about?

Well, in pre-Christian times, the period which is now referred to as Easter used to be celebrated as the period of transitioning from darkness to light. From darkness to life. And life comes from fire. The best fire was made using wood, as everyone knew that fire made using firesteel came from demons. To make fire, firesticks were used. The fire making used to take place leaning against sacrificial altars or the bases of sculptures of the gods, then against temple plinths and even their walls. That is where the pits come from. One end of the fire stick would lean against a plank, the other against the wall.

And so, when walking around Gdansk and visiting its Gothic churches, it is worth paying attention not only to the layout of each church, but also to the bricks located at breast level or slightly below. This way, you will be able to learn more about the magnificent history of the cult’s fervour. However, such traces are nowhere to be found on bricks from the 19th century. With the arrival of Protestantism, the practice of making fire next to walls disappeared.

How is it done today? Well, nowadays, we have other ways of making fire.