Stories of love are abundant in the history of Gdansk. This time, we are not going to talk about Gothic architecture. To hear the echo of this story, you will have to enter a Gothic church – St Mary church. 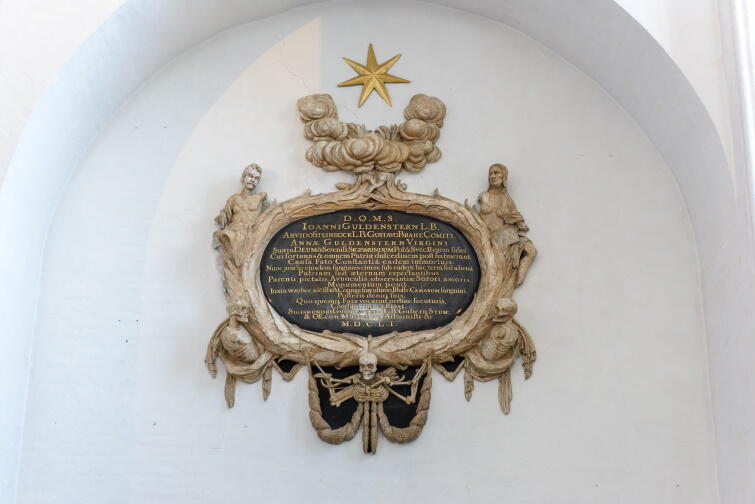 It all began in Sweden.

Nobleman Johan Gyllenstierna fell in love (not unrequited) with one Sigrid Brahe. However, the woman had already been promised to another man. The unwanted wedding ultimately did not come to pass, as the couple was helped by Princess Anne Vasa, at whose court the bride was a lady-in-waiting. The princess, moved by the couple’s love, organised a wedding at which she was a witness, along with a messenger of her brother, the king of Poland.

It was Wednesday, 19 March 1595, and it was the first wedding in Sweden to take place on a Wednesday. The fact provoked a scandal, as wedding ceremonies were customarily conducted on Sundays. However, the wedding was legal, and the witnesses present were eminent indeed – therefore, there was nothing anyone could do about it. The Swedish parliament took an interest in the matter, ordering compensation to be paid to the family of the scorned groom. Also, the young couple was to be barred from high society for six months. During that time, they had a son whom they named Sigismund, in honour of the king of Poland.

When Charles IX took the throne, those supporting Sigismund III left Sweden. The family settled in Gdansk. Johann soon became a widower, and he passed away in 1617. Sigismund Guldenstern, the fruit of the Wednesday Wedding, funded a chapel in the Gdansk Main Town Church. His Swedish surname was changed due to its difficult pronunciation while preserving its meaning.

The chapel is situated near Cobbler’s Gate and is referred to as Reinhold’s Chapel or Guldenstern Chapel. Above the entrance hangs the family’s epitaph.

Its author’s message is that not only members of the family can find rest here, but also those who have been deprived of their Swedish homeland...

And what about Sigismund? He was well educated, became a courtier of King Sigismund III and was naturalised. He went on to become a co-chairman of the Royal Ship Commission. His wife was the daughter of the Castellan of Chelm, Fabian Czema. Sigismund passed away in 1666 and was buried in the very chapel he himself funded...

Only the epitaph has survived to the present, adorned with a coat of arms with a golden star, in addition to a mention of the only Wednesday Wedding ever to have taken place in Sweden and the romantic mediation of Anna Vasa...