If you have already feasted your eyes on the brick Gothic churches of Gdansk and have counted them all, be sure to go underground. 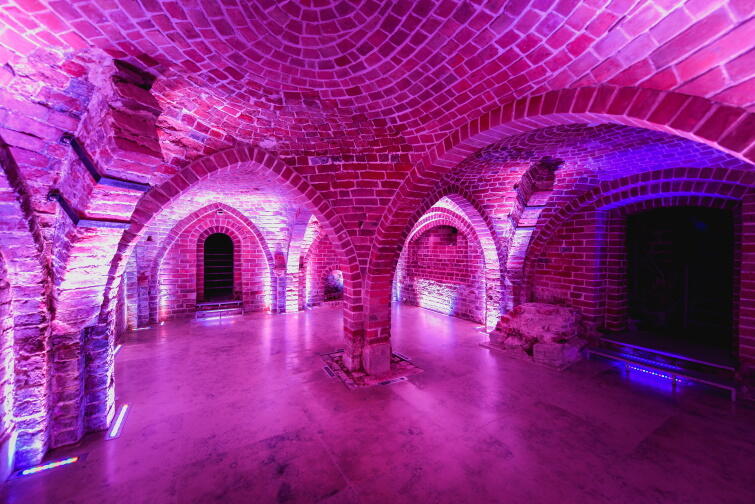 To get there, head for the Hall. The Trade Hall in Gdansk is situated in the Dominican Square, between Panska and Lawendowa Streets and Podwale Staromiejskie Street. The Hall has been there since 1896, located on the grounds of a former 10-13th-century cemetery and the first St Nicholas Church, the foundations of which are on display in the Hall – be sure to have a look while shopping for groceries.

The underground area, commonly known as the Romanesque Cellars, is situated in the southern part of the Hall, near the vegetable stands. They can be entered via one of the pavilions, and exited via another.

Why is it called a cellar? And why is it Romanesque?

In the past, the ground level was even lower than it is now. Over time, the dirt, faeces, refuse and manure would accumulate and be covered with straw, sand and wood planks. As a result, modern streets are at a level of at least 3-4 metres higher than their mediaeval counterparts. Evidence of this can be found in church entrances, where you sometimes have to climb down a few stairs – back to the Middle Ages.

The “cellars” are similar in this regard. Discovered between 2005 and 2006, they delighted the archaeologists with their architecture and the wealth of artefacts found in the course of the excavation. They are also the only remnants of Romanesque architecture to be found in Gdansk.

Approximately 1000 graves and four ossuaries, as well as funeral relics from the 11th century were found, in addition to devotional objects from the 13th century and numerous ceramics. Research into the purpose of the room, which is now located underground, proved that it was not a cellar but a monastery refectory. A refectory is a room in a monastery for meetings and having meals.

Now, this unique structure is open to tourists. For those interested in its history, the Archaeological Museum has prepared both a visual and an audio guide. The display cases in the cellars also house some of the relics found on site. The entire journey back to the 13th century is akin to an audio-visual spectacle.