The year of 1444 was the year of the Battle of Varna, in which King Wladyslaw III (son of King Jagiello, known from the Battle of Grunwald) met an untimely end. Are there any traces of that battle to be found in Gdansk? It is difficult to answer this question without delving into 15th-century chronicles. 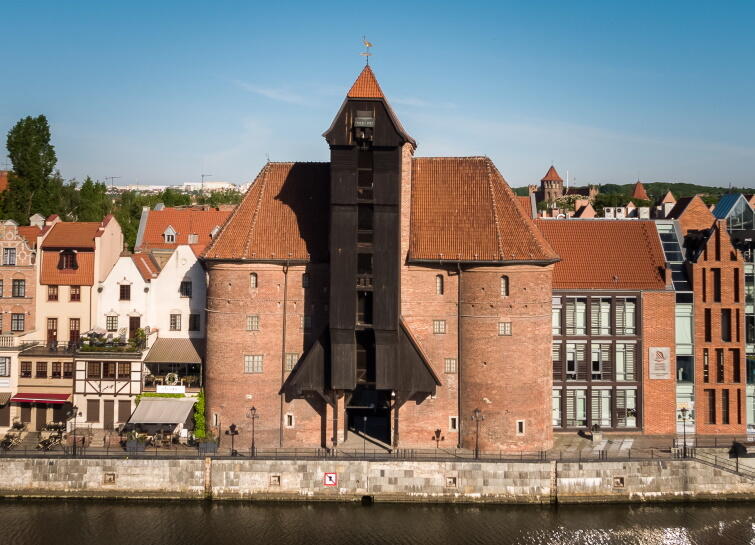 The year of 1444 was also the year when an important project was completed in the Gdansk port, one which increased the efficiency of loading and unloading of goods.

Nowadays, it is one of Gdansk’s hallmarks – the Crane.

It is one of the oldest water gates in the city. It is indeed a water gate! Situated on the very bank of the Motlawa, it now closes Szeroka Street from the east.

Mentions of a wooden structure closing the street from the river can be traced back to the 1360s. When the building burnt down in 1442, the city authorities decided to rebuild the gate, this time using bricks. All large construction projects had to be approved by the Teutons, considering that Gdansk was still under the rule of the Order. The Prussian Masters, however, did not take kindly to the idea of a defensive gate. They demanded that it should serve transhipment purposes exclusively. The people of Gdansk gathered the necessary funds and began building the gate, which was completed two years later, in 1444.

Nowadays, we can still enjoy the building, which was masterfully rebuilt after having been damaged during the war. It now serves as a branch of the National Maritime Museum.

Undoubtedly, the Crane’s treadwheels can be considered one of its attractions – in the past, they powered the structure. Originally, the building only had one pair of wheels, with one more being added later. The lower ones, which can be seen when passing through the gate, served to tranship goods up to the level of 11 metres. The upper pair of wheels was also used to raise masts on ships, and could carry heavy loads up to 30 metres into the air. In total, the crane’s capacity was two tonnes. All stories about slaves being used to move the wheels are fairy tales. The wheels were moved by port workers who received compensation, however small. Each wheel probably required four people to operate it. The workers answered to the crane master, who was employed by the city. It was his responsibility to pay the “wheel treaders”, among others.

If you want to learn more, be sure to visit the museum.