The best of brick

Every city has its hallmark building, one of which makes it instantly recognisable in every postcard and photo, and Gdansk is no exception. Its hallmark is the largest brick Gothic temple in the world. It is Gdansk’s most iconic building, the crowning achievement of local architecture, in addition to serving as a point of reference for people wandering around the city. 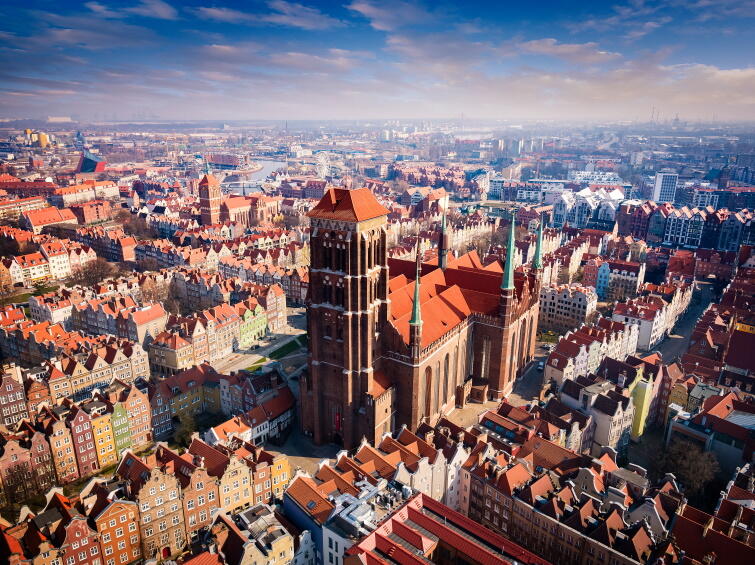 The temple in question is the Church of the Assumption of the Virgin Mary, referred to by the residents of Gdansk simply as the St. Mary’s Basilica. It is worth noting that the word “basilica” does not refer to the structure itself, but to the rank the church was elevated to by Pope Paul VI in 1965.

The building was erected during the “age of cathedrals”, and took 159 years to complete. This was considered neither fast nor slow – simply the usual tempo at the time. Did the builders know that it would be the largest of its kind in the world?

The year 1343, which is when construction began, must have been very difficult for the local residents. The reason for that was the fact that, at the time, the city, which was becoming increasingly rich, was pock-marked with construction sites.

It had been years since the city was taken over by the Teutonic Order, and the new grandmaster issued a decree which probably specified the area for the construction of a new temple. Considering Gdansk is built on unsteady ground, every new construction site needed to be prepared accordingly. The entire area had to be levelled and the ground reinforced with oak piles. Reportedly, more than sixteen thousand of them were used in the construction process. The next step was laying strip foundations, which were then caulked using mats made of wicker and reinforced with manure. It was also necessary to produce enough bricks for the building, as well as mortar. The latter had to be good enough to bind together the towering walls of the brick homage for the Creator. Carpenters, stonemasons and bricklayers also had to be hired.

The nearby clay pits served as the source of materials used in making bricks, which helped avoid raising the costs of the project. The brick production itself took quite a long time – about 3 seasons.

After that, the only thing that was left was to build the walls!

And so, after more than 500 years, we can glean the details of the construction process by looking at the walls. We can try to count the bricks that went into it, discover fossils in the stone plinth and marvel at the craftsmanship of mediaeval builders.